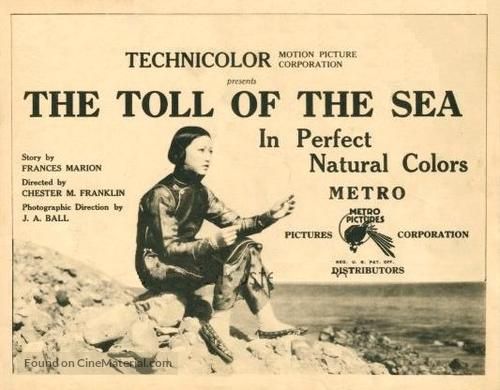 Hi everyone!
We’re proud to introduce a project we’ve been working on at Sacred Spaces over the past few months. We haven’t quite got a name for it yet but we know more or less what it is – a new updated performance of Toll Of The Sea.
Some of you tuned in to our screening last week, but so everyone’s on the same page, Toll Of The Sea is a 1922 techncolour film starring Anna May Wong. There are a lot of interesting things in this film – it’s the second coloured film in existence and the breakthrough role for Anna May who was only 19 at the time. It’s also got an almost all Asian cast with no yellowface, something that we still struggle with today.
However, despite these great points, the film was very much still a product of its time. Based on Madame Butterfly and set near Hong Kong (although the actual location is undisclosed), Lotus Flower, played by Anna May, falls in love with a white man .The film relishes in the cultural clash between Lotus Flower and her fiancé Alan Carver who eventually forgets her for his American childhood sweetheart. Quite often, despite being set in Southern China and with a large Asian cast, the Chinese characters are considered very much secondary to the white Americans.
When Justin and I sat down a few months ago to discuss what we could do with this film, one of the first things that can up was to revamp the soundtrack. I’ll go into more detail about this in later posts but the original soundtrack, like the characters in the film, relied heavily on stereotypes. What would happen then, if we took out the original soundtrack and made it more ‘authentic’ to the South China coast? Would we shift how we view the characters? Would the plot find a breath of fresh air?
We had no idea yet.
Sort of still don’t have an idea now, but we’re working on it.
Over the past few months, we’ve been doing research into the film. It’s production, it’s composition and it’s actors. We’ve been gathering folk music from various Southern Chinese traditions that could fit in. We’ve even been looking into different styles of Jazz and American music in an attempt to fully encompass all parts of the film.
In the coming weeks, we’ll be sharing more of the process. The idea is that at some point we can all sit together and watch a new version of Toll Of The Sea where Anna May Wong’s stellar performance is given new life.
All very exciting stuff! Hope you’re as excited as we are.
-Cyril Ma